Way back in another lifetime I decided I wanted to learn to play a violin. I found a teacher here in Cody, was given an old instrument by a cousin in SD and spent a year taking lessons. Unfortunately my bad hearing made it hard to know if I was playing the right note so I retired. The violin was relegated to a closet until last year when a friend, Dorothy Shippen, needed one. I figured it was better to have my old one played instead of hiding in the dark.

Today her dad, Gerald Anthony Shippen, presented me with this awesome sculpture of a falcon in full flight as a thank you. He is an extremely talented artist and I will treasure this piece forever.

If you want to see more of Gerald's work then go to www.geraldanthonyshippen.com.
Posted by Susan Ahalt at 1:25 PM No comments: Links to this post

I did it again

Yes, I spent 24 hours in the hospital with another session of irregular heartbeat. My heart had been funny for a couple days but I thought it was just the "palpitations" returning that I'd had in November. It wasn't. Luckily I'd planned ahead so when I presented myself at the emergency room entrance I'd already arranged for my dogs to go to a boarding place and someone to feed the other animals.

I had arrived at the hospital about 9:30am and hadn't eaten anything since very early so Dr. Rashkow was able to shock my heart that afternoon at 3:00pm. Having gone through that procedure in January, 2014, I knew what to expect. And this time I was in a regular room instead of ICU. My nurses, aides and doctors were all super.

Thanks to Sara, my volunteer, for hauling the dogs and doing chores. And to Nathan for putting my shipment of rats into the freezer when he came by to return some mice he'd borrowed for field work.

The only result this time is feeling rather tired, they changed meds and put me back on blood thinner but otherwise I can do whatever I want. Sara also came by this morning to help with cleaning all the rodents which was wonderful of her. As the head of UPS here in Cody she's very busy but never hesitated in immediately helping do what needed to be done.

And to my friend Susan who brought me a pizza. I was supposed to join the volunteers for the Jack Russell/Corgi races that evening at a local pizza place but obviously wasn't able to make it. It made the end of my day so much better than it started out.
Posted by Susan Ahalt at 1:49 PM No comments: Links to this post 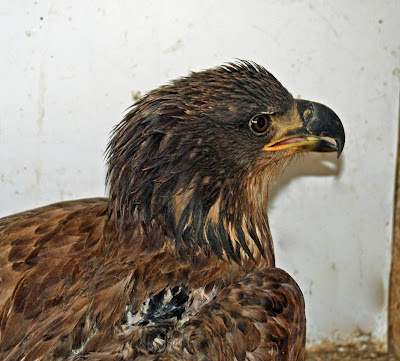 Right after I got home from taking the golden eagle in the previous post to the vet I got another call about another eagle. I was told that it was a golden with a broken wing. Off to the George Farms I went and met six very nice young men who then took me to where they'd seen the bird.

By the time I got there it had turned into a coming two year old bald eagle who was not thrilled having someone coming towards him with a large net. He does have a broken humerus but at this point I'm not sure it will be fixable. The fracture is very near his shoulder joint, a tricky place to repair something. He goes in on Wednesday to see if surgery is possible and if his wing can be fixed. Fingers crossed everyone.

UPDATE: His surgery went pretty well but only time will tell if it's a success. He has a typical bald eagle temperament, feisty, that should help. I started his pain meds today and have him in my warm rodent room as it's only in the 20s right now. More updates later.
Posted by Susan Ahalt at 6:47 PM No comments: Links to this post

Today I got a call from a wildlife consultant in Laramie about a downed golden eagle near Lysite. That's through the canyon, take a left at Shoshone, another left at Moneta and through Lysite, about a 3.5 hour drive from here. This outstanding bird had been hit by a vehicle and couldn't fly. Luckily a person from ConocoPhillips saw her and called the consultants for their fields. Chad Olson from Haden-Wing Assoc. spent at least four hours trying to find someone to take her, finally calling me around noon.

I was fortunate in that Warden Jessica Beecham of WGF in Riverton was willing to make the almost 60 mile drive to pick her up and then another hour or so drive to meet me south of Meeteetse. The eagle wasn't doing well but I'd called ahead for an appointment at my vet so she could be seen right away.

Her injuries appeared to be only internal, no broken bones were found. She died in my arms just shortly after arriving at the Lifetime Small Animal Hospital in Cody. There was just too much damage done to her by a very large vehicle.
Posted by Susan Ahalt at 6:42 PM No comments: Links to this post 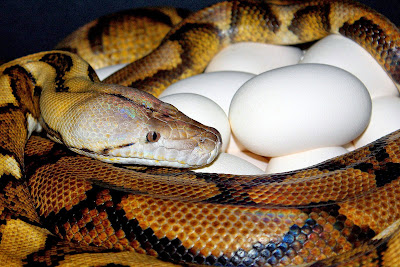 Her name is EVA and she's just finished laying 20 eggs. Reticulated pythons are very large and extremely beautiful. Now for the wait; 80 days before they hatch. This is her first clutch, hopefully all will go well and there will be 20 pretty babies arriving on time. My friends Sara and Mike are the proud grandparents to be.
Posted by Susan Ahalt at 2:38 PM No comments: Links to this post

First gold of the year 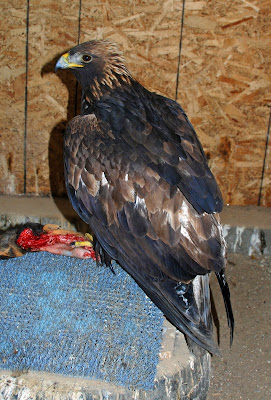 I got a call on Saturday from the WGF biologist, Dan Thiele, in Buffalo about two Golden Eagles found near town and unable or unwilling to fly. As Buffalo is about three hours from here, I was not looking forward to that drive in this weather. Luckily Brad Rogers, the Buffalo USFWS agent offered to bring the birds here. He and his wife arrived around noon.

These eagles are both about 9-10 months old, I believe they're both males, and are just stunning. The one shown above, JANUS, has what appears as a fractured right radius or ulna but I don't think both bones are broken. It is in excellent position so xrays will show just what is needed to help him. 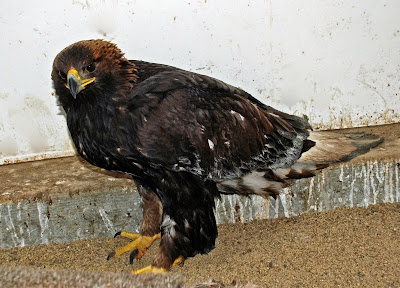 The other eagle, DEUX, doesn't show any damage but refused to fly when approached for capture. I will have some tests run on him to see if we can pinpoint what's keeping him grounded.

These two babies are the first to come in this year, hopefully they will also be released within a few months.

UPDATE: JANUS does have a fractured ulna but it is in excellent position and even has a callus started at the fracture line. That means the injury happened a couple weeks ago. He must have been very good a catching food as he is in relatively good weight.

DEUX has roundworms so he's on medicine for three days and then that's repeated in 18 days. He is already feeling better and sitting on the shoulder high wall perch in his pen.
Posted by Susan Ahalt at 12:51 PM No comments: Links to this post