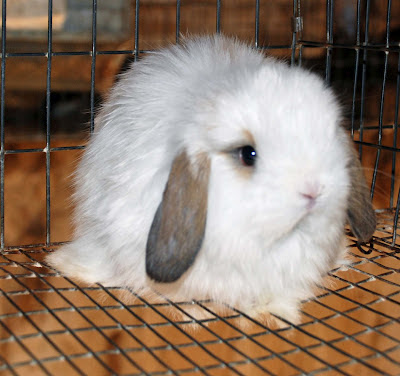 Okay, this is about as cute as it gets in the rabbit world. This tiny lop doe came to me from a breeder because she's not quite good enough for the show ring. She'll now spend her life as a mom and if she doesn't want to do that she'll live here gratis.
Posted by Susan Ahalt at 3:25 PM 2 comments: Links to this post 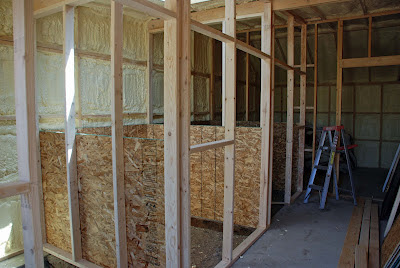 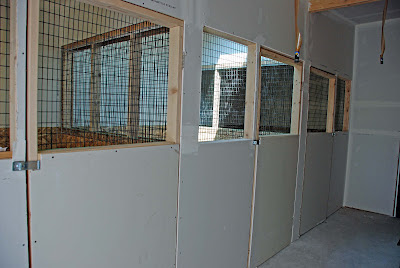 The new addition to my cage room is coming along nicely. John has put the sheetrock on the doors and walls, the vinyl coated wire dividers are up and the storage room is now full. These mews are for large birds that need to be inside for treatment. In the past they've had to live in dog cages meant for smaller animals. That made it hard to treat them, mostly for me as I had to do it on my hands and knees. Some final trim work and paint and this will be a very welcome area for the birds.
Posted by Susan Ahalt at 4:01 PM No comments: Links to this post 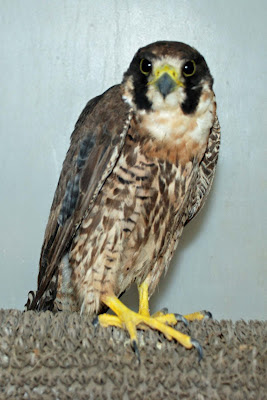 This is REX, a one year old Peregrine Falcon found in a very starved condition near Worland. He's been around long enough to know how to hunt so the reason for his being unable to fly very far is hard to figure out. Right now he weighs less than 14 ounces and should be much more than that.

I've given him fluids and will introduce small amounts of his usual diet, quail, perhaps tomorrow if he's still alive. Sometimes a bird will get so thin that they can't be brought back. Hopefully in this instance he will respond and recover completely.

When he's ready he'll go to my subpermittee and master falconer, Chris, for conditioning. He'll need to be very strong in order to catch his meals. Because he is only one year old he won't have a mate so will be released in the best possible habitat for survival.

NOTE: This wonderful young bird died today (Friday), his body will go to the state lab to see just what caused his death. Possibly WNV.
Posted by Susan Ahalt at 3:54 PM No comments: Links to this post 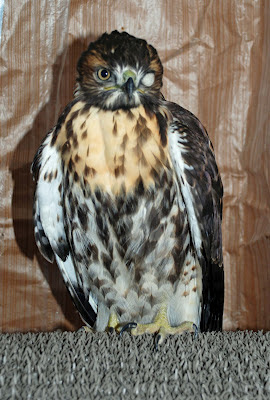 This exquisite baby Red-tailed Hawk, JIMBO, has had a hard time in the short 4-5 months he's been on this earth. Luckily found by the hands on the McFadden Ranch outside of Greybull, he is suffering from severe starvation. Probably due to the injury to his left eye. As you can see he has his lower eyelid closed over it. Right now he only weighs about a pound and should be twice that.

He'll have to gain needed weight and strength in order to survive the surgery to repair his eye wound but so far he's doing well. I have to skin and cut up his mouse meals and hand feed him but they've stayed down him and so far so good.

The prognosis on his eye is guarded, time will tell me if he'll be able to see well enough for release. After some hunting training of course.
Posted by Susan Ahalt at 2:31 PM No comments: Links to this post 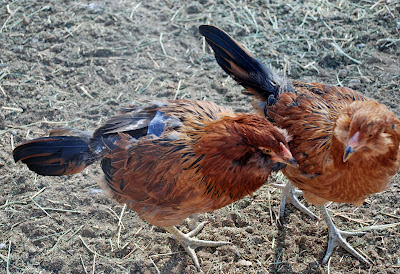 Okay, not really but this beautiful young hen on the left is being protected by one eagle feather. The saying, "pecking order" is true, especially among older and younger chickens. They have to be close to the same size to be introduced to each other. In this case I put eight young Araucana hens in with my old ladies. For two days all was okay but then it was apparent the younger birds were being picked on.

Whenever a chicken sees the color red she picks at it. Once one drop of blood is exposed it's fair game and can be quickly fatal. It was for one of the young birds so when it started happening to another I decided to intervene without having to separate them.

I gather up molted raptor feathers to either send to the federal feather depository near Denver or for imping purposes. This particular feather was damaged and not good for either purpose so I did some trimming and then taped it to the young hens back to cover where she'd been injured. As long as they can't see the wound it's able to heal and replace the missing feathers. You can see the narrow strip of tape and the rather dark feather just above the base of this babies tail.
Posted by Susan Ahalt at 2:21 PM No comments: Links to this post 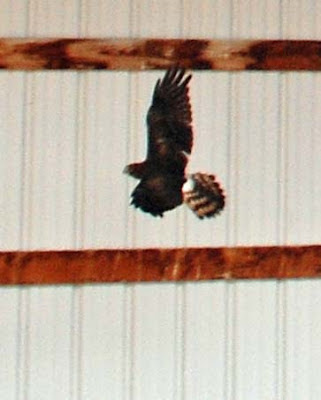 Another of my young birds was released today, MINNNIE, the Northern Harrier. She came in so weak she could barely stand. As there are harriers floating over the hay fields near my house I decided to release her here. That way if she's a bit hungry she can come back for a snack.

As I figured she'd been too quick for me to take a shot outside, this one is in the hawk flight barn as she was zooming around.
Posted by Susan Ahalt at 12:36 PM No comments: Links to this post

One baby is gone 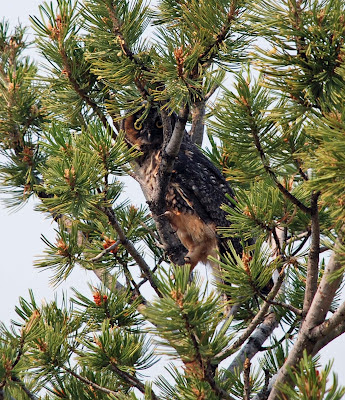 Today I took TIMBER out and released her back to the wild. She made a dash to the closest tree, then to a large rock outcropping and then back to the top of the tree. As you can see, she's glaring at me daring me to try and catch her. As quite a few Long-eared Owls have been sighted in this area it will be an ideal place for her to start the rest of her life.
Posted by Susan Ahalt at 12:34 PM No comments: Links to this post

A great loss to IBR

The bird world lost a super friend on July 30th when Ursula Kepler died. I met her in the late 1980s when she was running the Audubon Christmas Bird Count. All participitants met at her house after the count to do a tally and have some wonderful food. She even joined me on my four mile walking Cottonwood Creek route one year when she was in her 70s.

It seems nothing dampened her spirit or zest for life and she was a joy to talk to as you never knew what she would say. IBR became a 501C3 non-profit back in 1990 with Ursula a founding board member. She's continued in that role since then. She and Kep have also donated to the birds every year and her yard has been the release site for a few songbirds.

I was at their 50th wedding anniversary but missed the 60th. Kep was a very nice gentleman and always said hello and asked about how things were going with the birds. I will miss both of them.

Susan
Posted by Susan Ahalt at 9:49 AM No comments: Links to this post 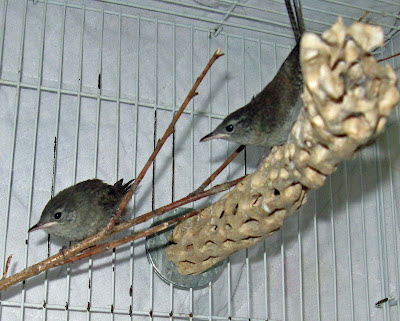 Shown in the previous post, the babies have now been identified. They are house wrens and thanks to Susan Osborne they survived and have been released into a superb backyard made just for birds. I went on a two week vacation shortly after receiving the babies but Susan said she would take them and follow the rigorous feeding schedule. As you can see, they are bright eyed and ready to go.
Posted by Susan Ahalt at 9:43 AM No comments: Links to this post