Happy New Year everyone. The past 12 months has brought many good things to IBR along with some very sad moments. Overall the year was an extremely good one in that quite a few of the birds who arrived left under their own steam and are back in the wild again.

Thank you to each and everyone who sent donations and good wishes over the year, I couldn't have had as much success without your support. Have a really awesome 2011 and beyond.
Posted by Susan Ahalt at 11:43 AM No comments: 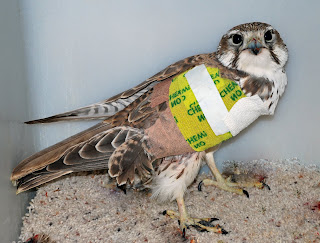 Well, almost. This is RUDOLF (Nureyev) the most recent Prairie Falcon to arrive at IBR. Today, in fact, and he's suffering a fractured right wing, the same as MIKHAIL. Unfortunately this break is worse so his prognosis is guarded. He will have surgery tomorrow (Thursday) to see if Dr. Pedersen is able to put the pieces back together. My fingers are crossed that there is a positive outcome for this wonderful little bird. He's only about nine months old so hopefully has a long life ahead of him.

UPDATE: Very sad news. The surgery was a success but unfortunately little RUDOLF did not wake up from the anesthesia. Everything was done to make him breathe including mouth to beak resusitation via the tracheal tube but to no avail. Thanks to everyone at the Lifetime Small Animal Hospital here in Cody for all their effort. Drs. Blessing and Pedersen and techs Deana and Jackie have done all my bird work for over 20 years and this rarely happens. We tried.......
Posted by Susan Ahalt at 4:52 PM No comments:

She will and she did. 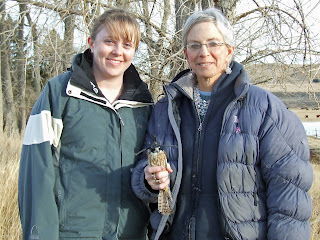 In a post a few weeks ago I showed a photo of OLIVE, an adult female kestrel. At the time I didn't know if she would fly again after having her fractured wing repaired. Today was the proof that Dr. Erin Pedersen did a wonderful job in that surgery as once more, OLIVE is flying free. We released her in an area that is frequented by kestrels, lots of old snag cottonwoods with nest holes available.

Thank you so much Erin for all your hard work. Dr. Pedersen is an expert in dogs and cats, not birds, so this procedure proves what an excellent surgeon she is. It was doubly hard due to the fact that, as you can see, OLIVE is about the size of a robin. It's all worthwhile when the patient can be tossed in the air and fly away without a backward glance. Or thank you for that matter.
Posted by Susan Ahalt at 3:40 PM No comments: 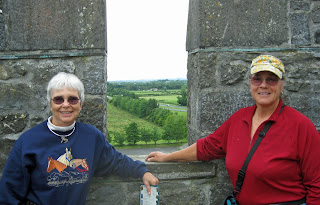 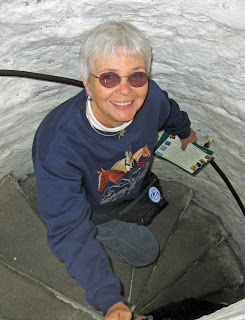 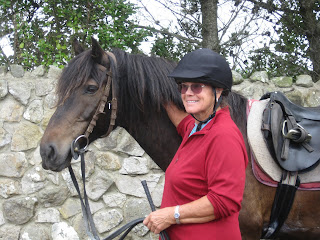 This past September a couple friends of mine I've known for almost 50 years went on a horseback riding vacation. In 2005 we three went to Scotland for the same thing but this time they went to Ireland without me as I couldn't get away. Wish I'd joined them as these photos show they had a ton of fun there. Shari, with the horse and Jan, on the stone steps live in IL near where I'm from. We get together whenever I can travel back there and enjoy riding when ever we can. Thanks to Jan and the loan of her wonderful horse, Rosie, I'm back in the saddle again if only for a few hours. Hopefully they'll get back out here some day and we can do our riding in the beautiful mountains around Cody.
Posted by Susan Ahalt at 8:05 PM No comments:

Merry Christmas one and all 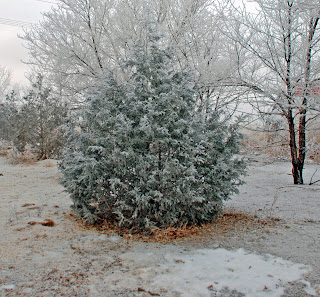 This morning I went out to start chores and saw that we had a wonderful hoar frost covering everything. I had to take a photo of my very own flocked tree. I hope everyone has a wonderful Christmas, finds lots of presents under the tree, eats plenty of super food and just enjoys being alive at this wonderful time of year.

All my four-legged and feathered family members wish everyone the Merriest Christmas ever. Okay, group hug.....
Posted by Susan Ahalt at 11:03 AM No comments: 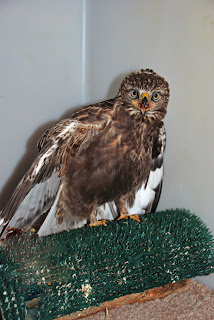 This is COCOA, a dark phase of a Rough-legged Hawk. As noted in previous posts, this species only spends the winter here after migrating from above the Artic Circle in Northern Canada. This youngster is about nine months old and altho a bit thin seems in good shape. He goofed and ran into the side of a truck when he tried to fly away from a roadkill he had been munching on. I'll keep him here for a while to fill his tank and then send him on his way. Thanks Jeff for driving him all the way over here from Cowley.
Posted by Susan Ahalt at 10:57 AM No comments: 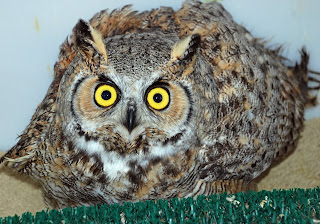 You are hypnotized, you will do as I say, you cannot escape me. Oh, okay, this isn't really a hypnotist but a very beautiful Great Horned Owl, MAGIC. She came to IBR from another rehabber for evaluation on a wing problem. She'd been found caught in a barbwire fence the end of November and altho she hadn't torn up her wing she did some damage. Unfortunately that included tearing the tendon that runs along the upper edge of the wing. Because it wasn't seen right away it healed with scar tissue so she can't fully extend that wing.

MAGIC will go back to the original rehabilitator so she can try and place this bird at a facility for use in educational work.
Posted by Susan Ahalt at 1:53 PM 1 comment: 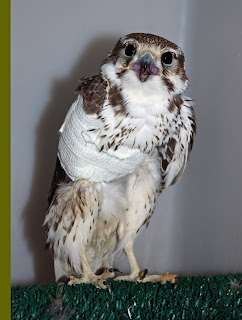 This lovely male Prairie Falcon is MIKHAIL. He's very light on his feet so I named him after the famous ballet dancer. He was found in a cow pasture on a ranch in Greybull suffering from a fractured right wing. This photo was taken just a few hours after his repair surgery on Wednesday.

Most of this species are very high strung, insane is one word for them. They are very "flighty" and hard to handle. Thank goodness MIKHAIL is a rather quiet bird for a Prairie and will hopefully stay that way all through his recovery.
Posted by Susan Ahalt at 1:47 PM No comments: 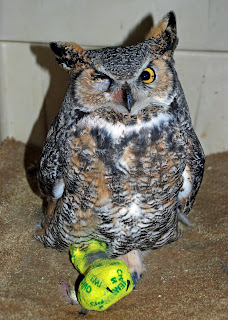 Oh dear, at this point the truck won but I'm not quitting and neither is SQUINT. He was hit by a truck on Monday night but luckily the person who was driving didn't just head down the road. Tod gathered him up and called me. As you can see from the photo, he's not a happy camper. His right leg is broken in two places, between his knee and ankle and between the ankle and the toes. You can see the beautiful chartreuse soft cast he's now wearing.

He also has some damage to his right eye and his lungs are bruised. He's breathing hard but has kept down the antibiotics and today I gave him fluids which has also stayed down. If his breathing is improved enough he'll have surgery to pin the fractures in his leg as soon as possible. His eye is also improving with the eye drops, we'll have to wait to see if his vision is impaired.

Tod did tell me that he has a mate, he hears them calling back and forth all the time. As they mate for life but this isn't breeding season, hopefully he'll be back in their territory in time for them to reconnect.

UPDATE: The surgery was done on Tuesday and at this point SQUINT is standing on his cast and looking great. The eye is still iffy but the drops are helping. The temperatures are rather cold so he's living inside the rodent room where it's kept warm. And it's handy to the food source I have to hand feed him a few times a day.
Posted by Susan Ahalt at 9:02 AM No comments: 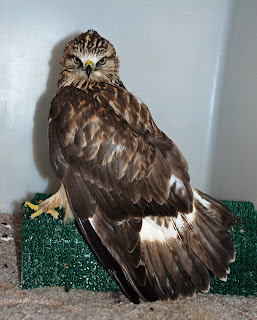 Yesterday I got a call from my rehabber friend, Janet Britt, in Riverton about a rough-legged hawk that had been brought to her by the game warden. The bad news is that this beautiful bird had been shot. The only bright spot is that it was done in front of a witness who supplied the warden with the make and color of the vehicle and a partial plate number. At this point I'm hoping the person who did this horrible thing will be caught and pay the penalty.

Roughies are a protected species and as such are not hunted. GUNNY is a baby of this year born above the Artic Circle in northern Canada. He survived his birth and fledging and the ardurous migration to WY only to be met with a bullet. He's had surgery to try and repair the damage but only time will tell if it works and GUNNY will be able to fly.

UPDATE: Horrible news, I found GUNNY dead in his cage this morning (Wednesday). He had eaten some of his mice earlier so I have absolutely no idea what caused this to happen. Unfortunatly there isn't enough evidence to find the guy who fired a dozen shots at this beautiful bird a week ago. Very sad day today.
Posted by Susan Ahalt at 10:27 AM 1 comment: 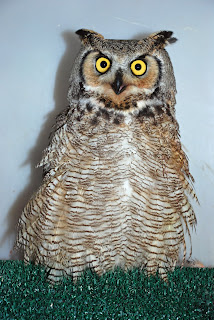 The day after Thanksgiving this beautiful female GHO arrived. PUNKIN came to IBR so she could have Dr. Blessing do surgery on her left wing. She was probably hit by a car and suffered a fracture in her wrist joint. The bad news is she was probably on the ground for a few weeks before being found. She was very thin and the wing tip could not be saved. It was removed and she is doing just fine, will hopefully become an educational bird in the near future.

Altho the main purpose of rehabilitating birds is to return them to the wild, those that can't do so, and have the right personality, are used in educational programs. These embassadors do more to inform the public about what they are, what they do, and how the impact from humans is usually to blame for their non-releasable state. Anyone can do a slide show (yawn!) about raptors but the minute you come into a room with a live bird on your fist you have the instant attention of everyone present. What's said is usually retained and is a great aid in preserving these magnificent birds.
Posted by Susan Ahalt at 8:24 AM No comments: