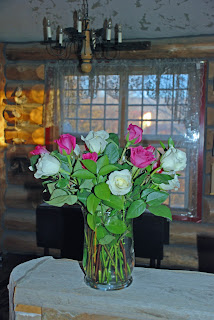 Yesterday the Buffalo Bill Historical Center here in Cody held their annual Volunteer Appreciation Brunch. As a volunteer there for many years I attend knowing I'd have a super time and get to meet others I only hear about or read about. This time I won. I got a beautiful sliver pin and this bunch of roses to celebrate my 30 years as a volunteer. I started out as a helper in what was then called the Special Events area. I graduated to being the head of that section and then to the graphic department when I retired from my "real job" and could devote more time the center.

Thank you everyone for acknowledging all the super people who work behind the scenes and in front of the public at this amazing institution.
Posted by Susan Ahalt at 7:24 AM 1 comment: Links to this post 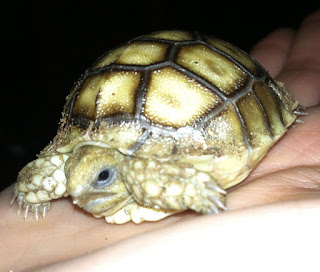 His name is Lord Hubert Cumberdale, well that is if it's a male. Otherwise she will be Lady Cumberdale. As s/he's only three weeks old, it will be five years before the sex can be determined. S/he is a Sulcata tortoise from California but now lives here in Cody with my friend Sara along with her snakes and various other animals. Sure is cute and you can see how small s/he is sitting in the middle of Sara's hand.
Posted by Susan Ahalt at 4:12 PM No comments: Links to this post 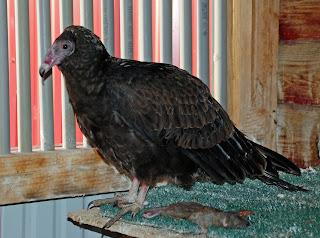 Yesterday a bird came for a visit. This is STINKY, an immature turkey vulture who is going to live with a falconer in Kentucky. Because he was taken as a very young bird and imprinted to humans he cannot be returned to the wild. Now he's going to be an educational bird. Okay, he's not the most handsome bird in the world but he does "have a great personality".
Posted by Susan Ahalt at 1:30 PM 2 comments: Links to this post 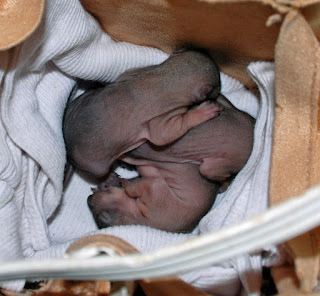 Good grief, it's three baby gray squirrels. I got a call tonight from a young lady whose boyfriend found these little babies after cutting down a tree. I didn't realize we had bushy tailed tree squirrels in this area altho in the past I've received two as patients. These three, two girls and a boy, are about two weeks old according to an awesome lady in Louisiana, Emily Winners. She is listed as an orphaned squirrel expert so I called her for advice.

I was amazed when these three took to the nipple on my syringe immediately and sucked down one cc of Esbilac really quick. I have to feed them every four hours but not through the night, thank goodness. I now know I'll also have to use a larger syringe but didn't want to overwhelm them with this puppy diet.

Hopefully they will be ready to go in about three months. By then I'll have the perfect release site picked out.
Posted by Susan Ahalt at 7:09 PM 1 comment: Links to this post 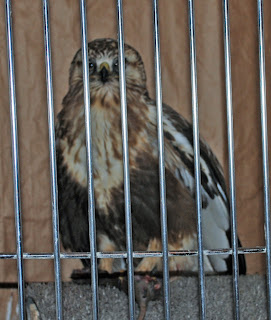 I wanted to take a photo of this bird with his wings in a normal position so it required the closed door. Otherwise he would extend them to the sides as far as he could. This is COPPERFIELD (as in David, the magician who makes things disappear). I got a call about him last week but he had done just that, disappeared, by the time I drove the 20 miles to where he was seen. Then yesterday I got another call from the same person stating the hawk was back on the roadkill again.

It was really windy so each time I got close enough COPPERFIELD just opened his wings and floated off. Luckily he didn't go far, all I had to do was get through one fence to capture him. Rough-legged Hawks are pretty clueless about humans so it didn't take too much time or effort.

Xrays show that he has a couple fractured finger bones and altho he's probably been on the ground for some time they appear in good alignment. As they are so small it would be impossible to pin them so that's why he's incarcerated for the duration. They start their migration to above the Arctic Circle in March, hopefully he'll be ready by then.
Posted by Susan Ahalt at 12:20 PM No comments: Links to this post

He's gone but not forgotten 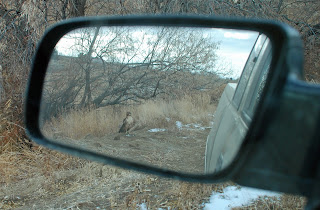 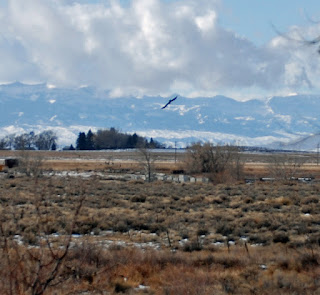 After successful imping of seven feathers, ASHTON is now back flying and soaring over his home territory. I wasn't sure if the work on his left wing feathers would allow him to fly normally, never replaced that many before. But as you can see from these photos, it did. He was shy about flying when we were around so we got back in the truck and Sara took this photo of him through the rearview mirror. Not long after that he flew to a close tree and then left for good. Hopefully his mate will be in the area so they can renew their bonds and set up housekeeping when the time comes. Thanks Sara and Paul for making this release such fun.
Posted by Susan Ahalt at 12:21 PM No comments: Links to this post 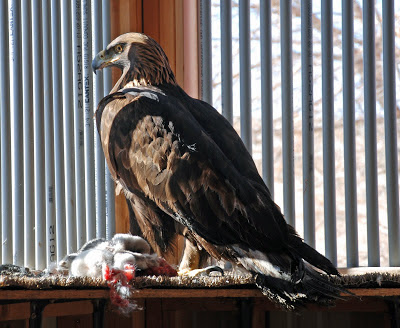 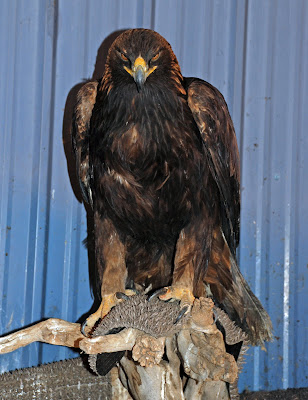 Here's the latest photo of FRANNIE. As you can see, she no longer wears her "toe shoes" and is now in an outside mew enjoying sitting in the sun on the window perch. She is now able to walk and stand normally on her previously balled up feet. Today she also was given a half of a rabbit to see if she would be able to stand on it and tear off pieces to eat. I'm very pleased to say she's done that beautifully.

Now it's a matter of time to see if the effects of the lead in her system have all been removed and she'll be strong enough for release. At 10 months old she has a very long life ahead of her and I just hope it's out in the wild where she should be.
Posted by Susan Ahalt at 12:10 PM No comments: Links to this post 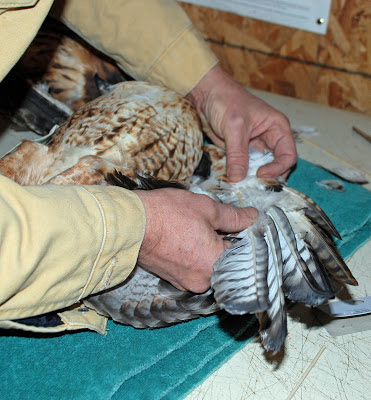 If you go back a few posts you'll see a photo of ASHTON with a bunch of his wing feathers blown off by a shotgun shell. Probably a disgruntled pheasant hunter. This past week he was helped in his plight by master falconer, Chris Pfister. He did what's called imping, or replacing his damaged feathers with those from another redtail hawk. As you can see it takes patience and time to make this happen. 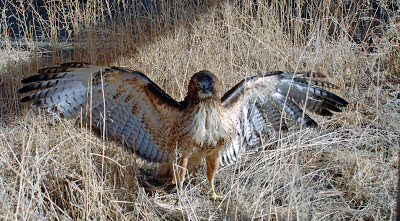 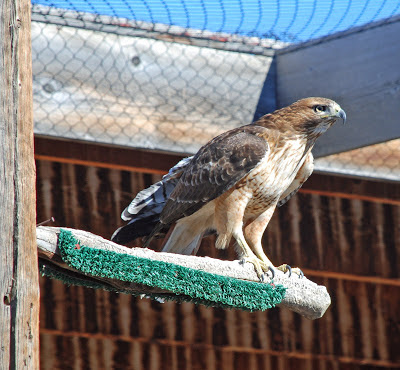 In these bottom photos you'll notice his new feathers and the fact that he's now able to fly up to a pole perch in the flight barn. He'll have a few days to get his muscles back in shape and then go back where he was found to catch up with his mtte.
Posted by Susan Ahalt at 11:57 AM No comments: Links to this post 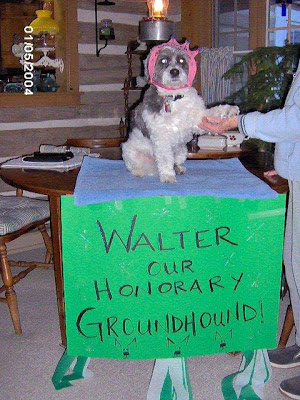 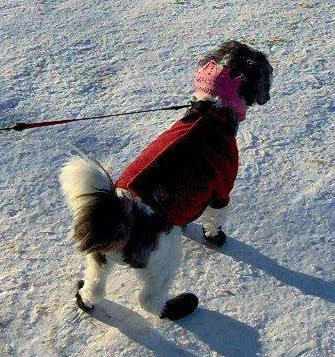 This is WALTER who was, as you can see, the Honorary Groundhound in the Ellison Bay, WI Ground Hog Day parade. He's a cockapoo cross and the very loved pet of my cousins, Pete and Shirley Repp. He wasn't fully dressed for the top photo, only had his pink crown on. In the parade he donned his black boots and a spiffy coat as you can see in the bottom photo.
Posted by Susan Ahalt at 12:59 PM 1 comment: Links to this post 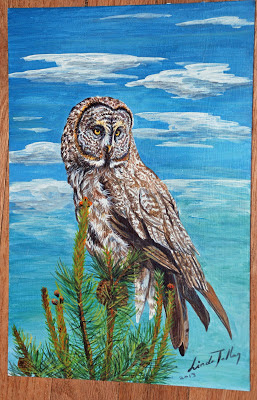 This isn't a photograph, it's a painting done by my friend Linda Jolley of Greybull. I met her many years ago when she and her sister brought me an injured grackle. They were born in Scotland and last Saturday we got together at the annual Robert Burns Birthday dinner here in Cody.

She'd told me she had a picture of an owl but didn't know what kind. I thought it was a photograph she'd taken so imagine my astonishment when she presented me with this wonderful painting of a Great Grey Owl. She's donating it to IBR as a raffle item to use for fund raising.

I still have to get it framed but then will set about figuring out how to make the raffle come to life. Thanks Linda, you're the best.
Posted by Susan Ahalt at 4:34 PM No comments: Links to this post

This photo shows what happens when an uncaring person aims his shotgun at a raptor. The majority of ASHTON's primary feathers have been blasted away leaving two pellets in his wing.

This adult male Red-tailed Hawk was found in a tree but unable to fly well enough to hunt. There is a nearby game bird farm who allow hunters on their property to shoot game birds. The actual hunting season is closed but this place has permission to continue shooting birds until the end of March.

Because raptors mate for life, and this is the time of year when they're renewing their bonds and selecting a nest, it is very important this male be returned to where he was found. The sad thing is that it will put him in harms way again, and it will also threaten his mate and any babies they fledge.
Posted by Susan Ahalt at 4:17 PM No comments: Links to this post 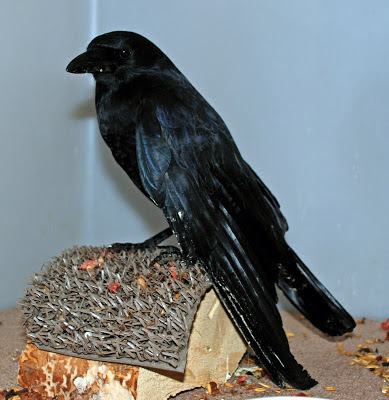 Not everyone likes corvids but I do and it pains me to see one injured in just this way. They are very intelligent birds and are rarely hurt in the wild. The exception is when a human decides to just go out and shoot something. In this case it's CROW, a beautiful American Crow. The xrays reveal one shot still in her left wing between her shoulder and elbow. Unfortunately another one smashed through her left wrist joint damaging it beyond repair. When the wound is healed I will try and place this super bird at a facility for use in educational work.
Posted by Susan Ahalt at 1:30 PM 1 comment: Links to this post