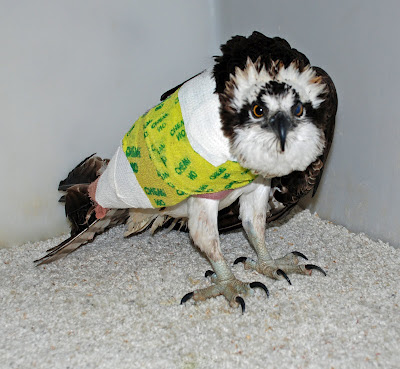 I spent this morning at the Arbor Day tree giveaway in Cody and on the way home got a call to pick up a downed Osprey. This is BELLE. I hope she is just a year old and doesn't have a mate or a nest set up as she has a badly broken right wing so won't be getting home for a long time. That is if it's fixable. She is now bandaged to prevent further damage and will go in on Monday for xrays and to see if repair surgery is an option.

This is a very difficult species to keep as they aren't the best eaters in captivity. Hopefully she will be an exception and readily take to being handed a whole fish and not have to catch it herself.

NOTE: She died Wednesday morning. Just too much trauma and stress for this wonderful young lady.
Posted by Susan Ahalt at 7:20 PM No comments: Links to this post 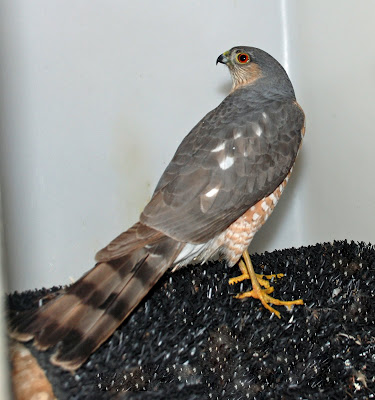 Last Friday I spent six hours on the road driving to Lander and back to pick up a beautiful one year old female Sharp-shinned Hawk. She had been found in the middle of town and was luckily gathered up before any more damage had been done. I got a call from the WG&F office there asking if I would take her for rehabilitation. I was told that she was in very bad shape but she came around and was standing by the time I got there.

Her name is CARNEY as she was found in front of a place called Carnegie. Her left ulna is broken altho the radius is just fine. Amazing how the larger bone fractured but not the smaller, thinner one. At this time she is behaving herself in a cage, eating her half quail a day and therefore isn't wearing any bandage. The unbroken bone is acting as a splint so given a few weeks she should be strong enough to put into a small flight area to strengthen her wing for release. By not having the wing imobilized she will keep the muscles stronger and not require physical manipulation. That would be very stressful for her and sharpies don't handle stress very well.
Posted by Susan Ahalt at 7:08 PM 1 comment: 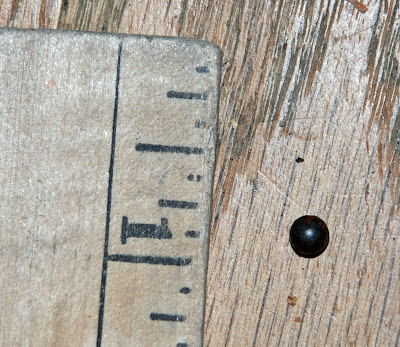 This is a photo of the pellet removed from the redtail's wing. As you can see, it is a very large one so he was lucky the damage wasn't more extensive. The Powell game warden now has this as evidence and will be pursuing leads to see if we can find the shooter.
Posted by Susan Ahalt at 11:33 AM No comments: Links to this post 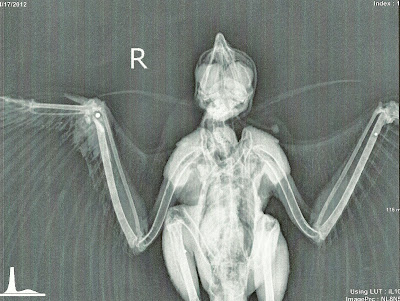 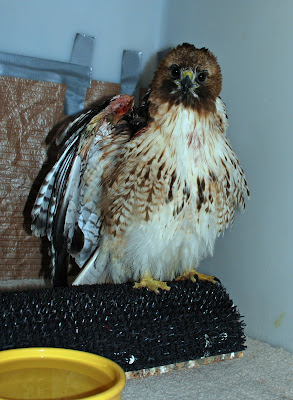 This beautiful adult redtail was shot on purpose with a shotgun. You can see the spot on his right wrist where surgery was done to remove the pellet. There are two others in him, one in the right leg and one near his left wrist. Neither of those are causing problems. The one in his right wing landed in just the wrong place, his wrist joint. Hopefully by removing the pellet and with cage rest he will again be able to fly.

Thanks to Daniel Meyers, Meyers Ranch, just east of Garland, who spotted him as he was parking his tractor for the night. Because he called me right away this handsome hawk has a chance of returning to the wild.

The top photo shows the xray of this bird. You can readily see the one in his right wrist. Harder to see are the other two as they are smaller. Look hard.
Posted by Susan Ahalt at 3:21 PM 1 comment: 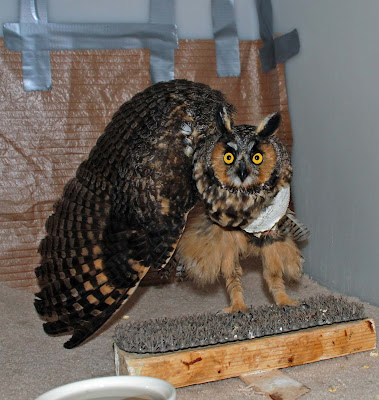 If this bird could raise both wings this adult female Long-eared Owl would be an awesome sight. As it is, STELLA can only use one because her left wing is bandaged to her body prior to the surgery tomorrow to repair the fracture. She was found by a WGF person on his rounds up in the mountains on a road rarely traveled so I have no idea how this happened.

As she was out and about it is hoped she is a young bird and not one of a pair as they would have babies in the nest by now. It will be many weeks before a decision can be made on her flying ability but her attitude is a good sign that she'll fight to be back in the air.

NOTE: It was discovered, during repair surgery, that the humerus in her left wing was fractured near both the elbow and shoulder and was not repairable. She was euthanized and her body donated to the Draper Museum of Natural History.
Posted by Susan Ahalt at 1:25 PM No comments: Links to this post 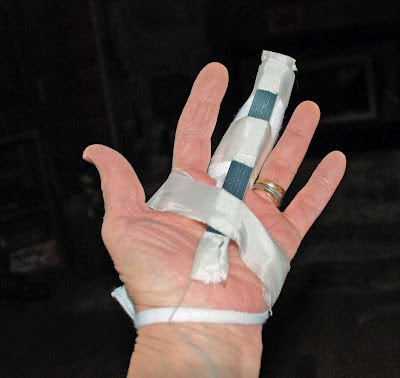 This is what happens when a bald eagle decides to make a statement about being handled. PRISCILLA had to go in on Wednesday for her weekly foot bandage change but this time she was feeling especially feisty. I am usually very careful when handling any raptor and especially eagles. This time she got her head from under the towel and zeroed in on my finger. I got the bleeding stopped, sort of, bandaged and drove her to the vet.

Then it was a trip to the urgent care facility for me. Three sutures and a large splinted bandage later here I am. It won't keep me from doing chores but it does make typing harder than usual.

UPDATE: I ended up having an IV antibiotic administered on Thursday with the catheter left in just in case it had to be repeated Friday. Not necessary but I have been in three times for a bandage change. Another today (Saturday) too. I'm also on a broad spectrum antibiotic for 10 days. Apparently infections become very dangerous in an extremely short time period. All these precautions were to make sure the tendons in my hand don't become infected and require surgical repair. Eeeeeeek!
Posted by Susan Ahalt at 7:09 AM No comments: Links to this post

About two weeks ago I learned that the US Fish & Wildlife Service issued a permit to the Arapaho tribe in WY to shoot two Bald Eagles for use in religious ceremonies.

I realize that there are probably tribal members who do not agree with this drastic measure to obtain eagles but as long as they don’t voice that feeling it will happen. Right now there are three tribal aviaries in OK (2) and NM(1) where a total of approximately 65-70 non-releasable eagles stand around for one purpose, molting feathers for the tribes to use in religious ceremonies and on Powwow costumes. The facilities are beautiful, one of the OK aviaries, I was told, was built with almost $500,000 USFWS grant (taxpayer?) money. And in November of 2010 the USFWS decided that all non-releasable eagles from rehab facilities had to be offered to these tribes, again just for molting feathers. Tribes may receive feathers and eagle bodies from the USFWS feather depository near Denver but they complain there is a very long wait and the bodies aren’t in good condition when received. I have been rehabbing eagles for 25 years and in that time placed 20 of them in various educational facilities around the U.S. to be seen by millions of people. The eagles in the tribal aviaries are seen by a few thousand tourists who make the drive to the reservation and, of course, by tribal members. When the educational facilities lose their birds from old age they may not be able to replace them.

I have been told by a high ranking USFWS person that because of the Eagle Act, Congress will not stand in the way of these “religious practices” even if some of the USFWS personnel may not agree with that decision. The USFWS also permit the Hopi tribe to take baby eagles from their nests and smother them in a religious ceremony. Reasoning being that it is the way it was done a couple hundred years ago. Lots of things were done 200 years ago that were deemed barbaric so they were stopped, as this permitting should be. There is no reason for killing these magnificent eagles, ever. 80% of baby raptors don't make it through their first winter and the Hopi are not even letting them try to make it in the wild. And these two Bald Eagle killings will only satisfy one or two people with hundreds more individuals perhaps wanting the same right. Now that the Pandora’s box has been opened it can’t be closed. I don’t see how the USFWS can deny any other tribe if they also request to kill eagles for use in “religious ceremonies”.

What is so upsetting is that these birds have just been taken off the endangered species list. The success rate of human marriages is about 50%, not so in the raptor world, they mate for life. Depending on when this despicable act takes place, many eagles are probably already sitting on eggs this time of the year. If you have any opinion concerning this matter please send letters to both the USFWS Region 6 office in Denver and the Arapaho tribe in WY so this atrocity can be stopped before any more Bald or Golden Eagles are killed. 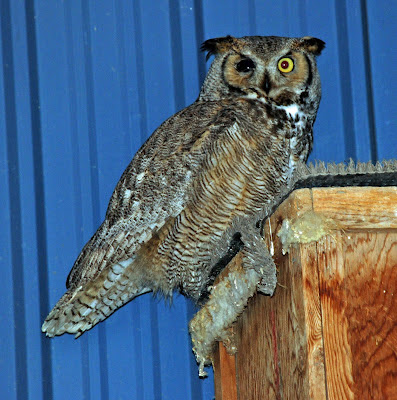 That translates to BUMP in the night. This beautiful Great Horned Owl was hit by a car near the rest area south of Meeteetse a week ago last Saturday. Luckily the driver stopped immediately and picked him up. She lives in Thermop so called me Sunday morning then drove and met me at the rest area. She did all the right things to keep him safe and comfortable until the transfer.

Unfortunately BUMP has lost the use of his right eye, it was totally damaged in the collision. The good thing is that he's in excellent condition and has been eating a rat a day since arriving at IBR. Now all he has to do is to prove to me he can make live kills and I will release him back where he was found.

The bad news is that GHOs are now probably sitting on babies and if this is a bird old enough to have a mate we will have lost them. One parent, especially the female, is not able to both brood and feed the offspring. Until they are 10 days old the baby owls can't thermoregulate their temperature so have to be continually brooded by the female. The male's job is to bring the food to her for distribution. At some point the female will have to leave the nest to hunt leaving the chicks ungarded and open to the weather.

I can but hope this is a bachelor and there isn't a female waiting in vain for him to show up.
Posted by Susan Ahalt at 4:02 PM 1 comment: Links to this post