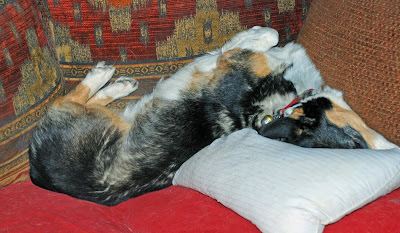 She's not dead and this photo isn't upside down. But MADDIE is. I sometimes wonder just how she gets into these positions on the couch. As you can see, she's also made sure the pillow is in the right spot.
Posted by Susan Ahalt at 9:23 AM No comments: 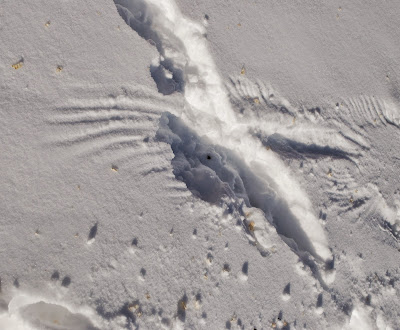 Life can be harsh in the wild. I came across this scenario as I was doing chores this morning. It was -8 outside but very sunny. As you can clearly see the imprint of a large bird wing, you can also see the trail of a rabbit where they converge. The rabbit track is the thick line coming in from the top and ending at the wing print. Unfortunately I'd walked near before noticing it so don't know if the rabbit got away.

I've seen a very large Rough-legged Hawk in the area for a few weeks and there is also a Red-tailed Hawk pair who are local residents. Roughies don't usually go after such large prey but redtails most definitely have them on the menu.
Posted by Susan Ahalt at 10:51 AM No comments: 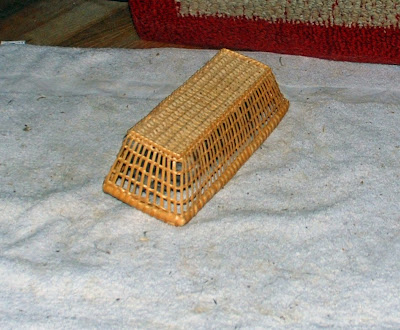 Nope, Trojan Kitten. I hadn't seen SAM for a few minutes so called his name. He knows it and usually comes running. Imagine my surprise when this basket slowly made its way into the living room...... If you look close you'll see his face behind the end of it. I had cleaned out my old ice box and saved some things to take to the Bargain Box. This basket among them. He apparently couldn't resist trying to climb inside and it flipped over. I sure wish I had a video of the whole episode.

UPDATE: SAM is in his forever home thanks to Nicole and her husband. This rambunctious kitten now has a big brother too. DIGGLESBY is a year old and I've received photos of the two of them playing on their climbing pole. He's still the King of Cuteness and I miss his presence in the house. My old cats, not at all.
Posted by Susan Ahalt at 8:09 AM 1 comment:

Our weather has had a dramatic change in the past few days. It went from 63 to -14 in one day. We did have some warning so full woodboxes and heavy clothing were in force. The horrible news is that all three lakes/ponds near Cody froze very quickly catching some waterfowl with their feathers down, so to speak.

I don't have any photos but in one day I took in two eared grebes, three coots, two shovelers, a pair of common goldeneyes and three lesser scaup. Thanks to Jeremy Gossert all but one coot, who died, were taken to the river and released. He is responsible for saving all but two of them, the two grebes came from different places. He found them partially frozen into Alkali Lake, three of them were also caked with alkali. He cleaned them up and kept them in his tub until I got there.

Unfortunately there are other ducks frozen into the lakes but there was no way for me to get them out as the ice wasn't thick enough to walk on. By the time I got there the ravens and one bald eagle had feasted. Life is just a bummer sometimes.

NOTE: Add one Lesser Scaup found on the ground at Stampede Trailer Sales near Cody. He was also taken to the river and released. He joined two Mallards and a Common Goldeneye male, probably not the one I released yesterday.
Posted by Susan Ahalt at 9:39 AM 1 comment:

SAM has found a way to keep his feet warm, shoot, his whole body. He's been fascinated with my fleece lined slippers once he found them. I ended up cutting off the leather ties, he wouldn't stop chewing on them. 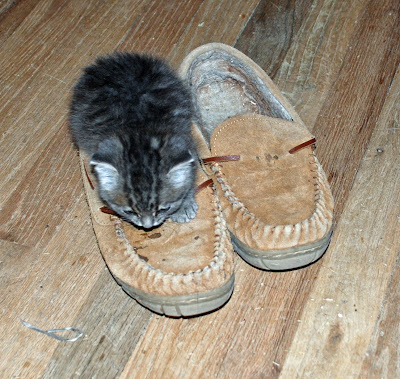 And then came his thinking he's really a huge lion in a teeny kitten body. He also found one of the dogs bones and decided to taste it. 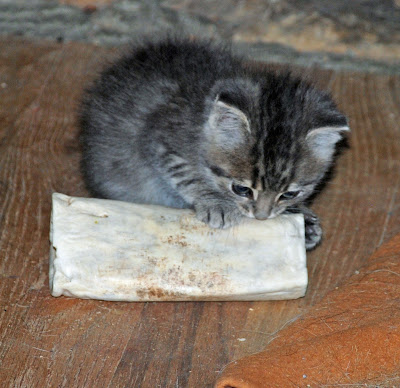 Posted by Susan Ahalt at 5:13 PM No comments: