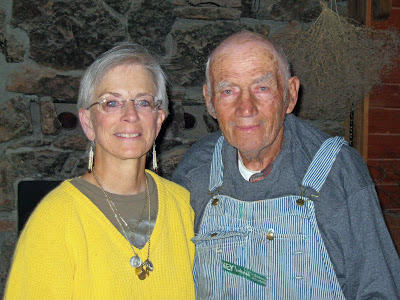 A week or so ago I had a visit from a couple of distant cousins from South Dakota and enjoyed every minute of it. Charlie and Deon were here a few years ago on a trip visiting various sights and people. They did the same this year going to see friends in Buffalo, Riverton, seeing Yellowstone National Park then on to my place.

Charlie is in his mid 80s now and altho he's finally beginning to show his age, his spirit is high and I loved seeing them again. Wish it could be more often. Deon took our photo and sent it along.
Posted by Susan Ahalt at 10:29 AM No comments: Links to this post 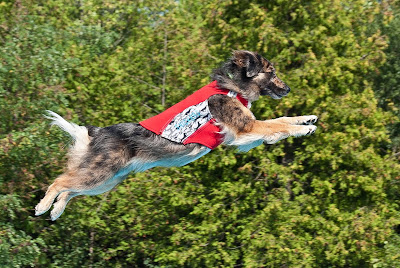 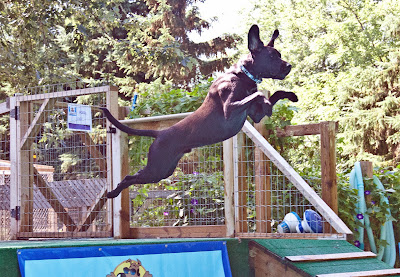 They can, just look at these photos. They are SNICKERS (t) and CANNONBALL (b) doing some dock diving. They belong to a cousin living in Ontario, Canada and just love what they do. They are also accomplished frisbee catchers too.
Posted by Susan Ahalt at 6:43 AM No comments: Links to this post 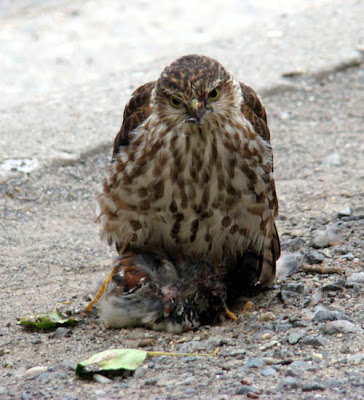 Yesterday I received a call from our Cody game & fish office about an injured Sharp-shinned hawk found in Meeteetse. They had gathered him up and were transporting him to me. The original story I got was that he had caught a sparrow and was munching it in the middle of the street. Because he would probably have been hit by a car he was moved to a nearby location. Then I thought the caller said he'd hit a window while flying away.

Now the true story.....The bird did catch a sparrow after flying out from under or near a parked vehicle. And he was eating it just inches from the road. And he was moved from that place. The story continues as told to me by Anne Price, curator of the Raptor Education Foundation located in Brighton, CO. They were up in Meeteetse for the 30th anniversary of the recovery of black-footed ferrets. They were the ones who moved the little sharpie off the edge of the curb on Sunday evening around 7 pm. At that time the bird was still eating his meal but was able to carry it a short distance away from the people. Then the bad started. Anne and her colleague left the sharpie in some tall grass to eat in peace. About an hour later he was found in the street after being hit by a car. He was gathered up, checked over by REF and WY G&F staff, and put in a warm safe place. The next morning, because he made it through the night, it was hoped he would survive.

I received the beautiful young bird around 11:00am on Monday. I immediately transferred him to a warm place and gave him fluids. I also weighed him. He came in at 2.1oz., approximately half of what he should have weighed. He died about 20 minutes later. I believe that just too many things happened to this approximately six month old male and his spirit couldn't overcome all of them. If only he had caught the sparrow in a location without people and cars...he might have then been strong enough to catch another meal. And another, and another until he was strong and healthy. If only he hadn't been hit by a car...he would have continued his life. If only, two little words that would have changed his world.

Thanks to the REF and the WGF for all their great efforts in trying to save this wonderful baby. And for the above photo taken while he was eating what turned out to be his last meal. 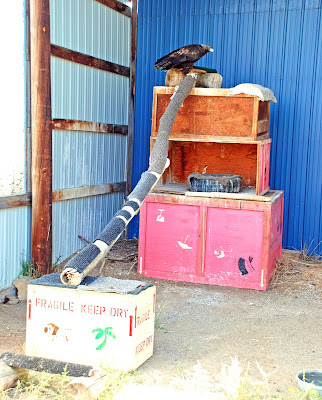 PATCH arrived here last June with horribly swollen tissue around her left eye. (see post "Shoulda ducked" on June 13th). After a bit the swelling went down and her eye came through an exam with fyling colors, no permanent damage at all.

The trouble is that this adult female apparently decided she just couldn't fly, at least not more than a few feet. Knowing that it was possible a concussion could cause this reluctance to do what comes naturally, I gave her time. Over the past three months there was some improvement with even long flights the length of the 80' barn, but not every time.

Last weekend I decided to try something new by rearranging the long tree log that was leaning against the "tower" in the barn. It has always been only up as high as the nest box platform in the middle of the tower. PATCH would routinely sit on the lower end and from time to time would climb to the nest. I wondered if I moved the end to the very top if she would continue upward. Of course the angle would be too sharp but I solved that by using one of the many sculpture crates donated to IBR from the BBHC. It worked just beautifully and with the help of lots of astroturf door mats for grip, you can see that PATCH has reached the stars. Well, the top of the tower anyway. She can now fly to the far end with the added height.

The next goal is to see her sitting up on one of the wall perches and surveying her kingdom. As an adult she doesn't have to learn how to hunt so as soon as she's making these long flights, and to the tall perches, she will be ready to return to where she was found as her mate will probably still be in the area.
Posted by Susan Ahalt at 1:24 PM No comments: Links to this post 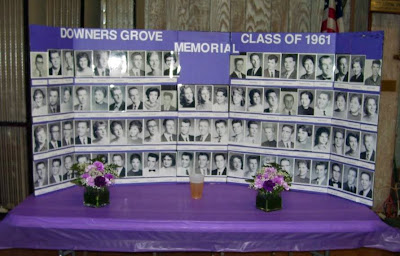 Just a short time ago my 50th high school reunion was held in Downers Grove, IL. I've not made any others and didn't make this one but a fellow student and former neighbor and his wife made the trip from their home in VA and sent me some information about it.

One of the things that Chuck sent was a display of the 82 kids in our class that have already passed away. One of those is my twin brother, Tom, who died in 1960. It really hits home when you see your own age group dying, makes it obvious that time has passed and things aren't as they used to be.

The photo above is of that display, my brother is on the far left of the top row. Now I wish I had taken the time to go home for the reunion and am now thinking that if it's possible I'll certainly try to make the 60th.
Posted by Susan Ahalt at 6:58 PM No comments: Links to this post 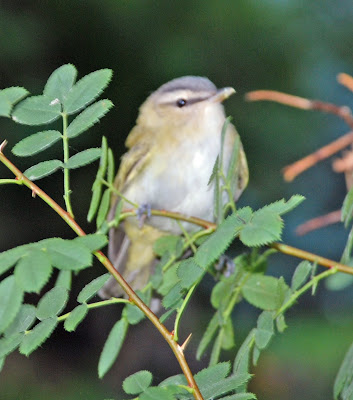 Here's the photo I took this morning when I released the Red-eyed Vireo shown below. He felt much better this morning after a quiet night. Not the best focus but you get the picture (pardon the pun). And it turns out this isn't a rare bird here, it has been seen but that doesn't make it less exciting for me.
Posted by Susan Ahalt at 1:06 PM No comments: Links to this post 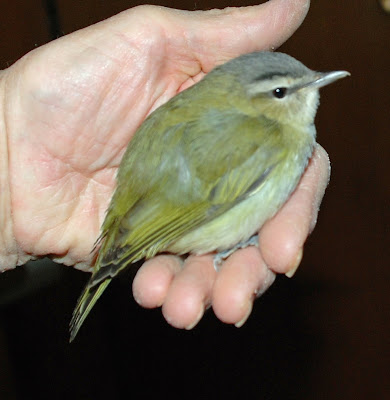 This very small bird was found here in Cody after it hit the side of a parked camper. It wasn't broken but does probably have a very bad headache so it's now sitting in a small cage in my kitchen and tomorrow morning I'll take it to a very protected yard in town and release it.

What makes it rare is that I believe it's an immature Red-eyed Vireo and according to the Sibley's book it has never been documented in this state. I've sent photos to an expert in CO for his opinion and will share that with you when he replies to my inquiry.
Posted by Susan Ahalt at 7:58 PM No comments: Links to this post 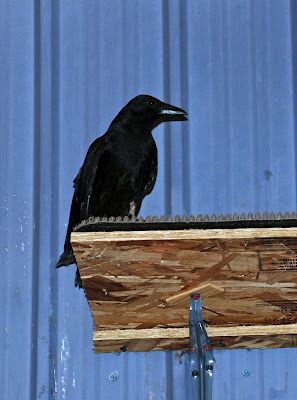 This is the most recent photo of CASSIDY showing him way up high in his mew. As seen in an earlier post, he came here from Cheyenne suffering from a broken leg. It was repaired and after the pin was removed he took up residence in an 8'x 20' flight area along with a magpie. He's now flying just super so will be released this weekend, probably around here as I do have quite a few crows flying by.

Again, thanks to Cathryn and Melissa for transporting the bird to IBR.
Posted by Susan Ahalt at 8:21 AM 1 comment: Links to this post

I now have the ability to post videos on my blog. There's only one for now, the release of that baby redtail shown in the post below. Thanks to Susan and her magic camera you can watch all 28 seconds of the event. Just click on the photo under the "video" heading to the right and the tape will run. Hopefully more will be posted in the future so you can see just what goes on at IBR.
Posted by Susan Ahalt at 3:43 PM 1 comment: Links to this post 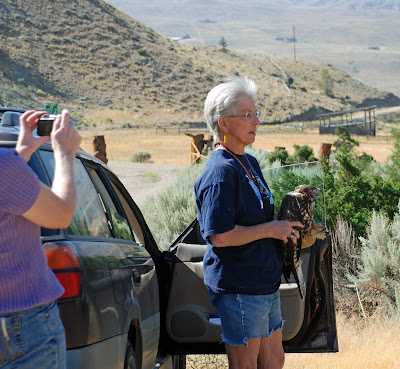 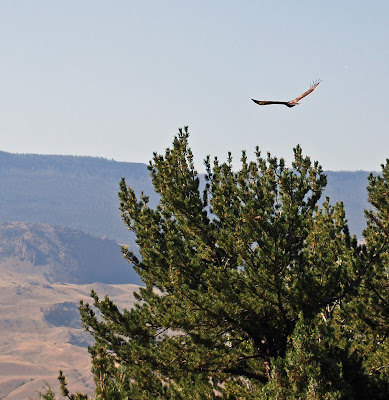 Today, thanks to help from Susan Osborne and her mom, Marge, another baby red-tailed hawk is in the air and headed for hopefully a long life. Little DAVIS came to me from off the Southfork Rd near Cody. She was starving at only 25.5 oz. and very weak. Since that time she's been gaining both flight experience and learning how to catch food.

We took her to Jim Creek Road near Wapiti and released her in near perfect conditions; light wind, bright sun and blue sky. And she now weighs 45 oz. Hopefully, with her new skills, she will survive, find a mate and raise babies.

She is a color redtail I rarely see, a dark phase. She will end up with a very dark body lacking the white chest and belly band of the normal colored bird.

Thanks Susan and Marge for the help. Susan took a very short video of the release and if I can figure out how to do it I'll post it on this blog. And Marge did an outstanding job taking the still photos.
Posted by Susan Ahalt at 3:53 PM No comments: Links to this post