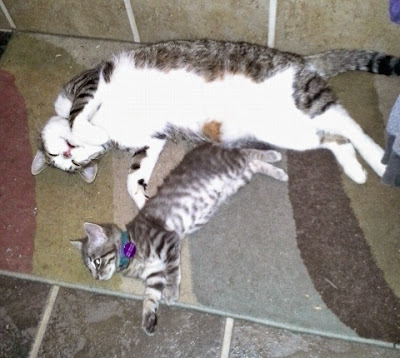 Little SAMSQUATCH and his "brother", DIGGLESBY, have become inseparable. As you can see, SAM has a lot of catching up to do in size but he more than makes up for that in spirit. He's now 2.75 pounds and gaining. I feel he'll always be smaller but his big heart and mind will make him the equal to any cat.
Posted by Susan Ahalt at 9:19 AM No comments: 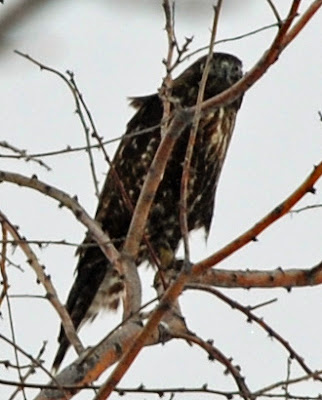 By that I mean that the hawk landed really close to my bedroom windows so I was able to take his photo. At this point I believe this is either an immature Harlan's Red-tailed Hawk or an immature dark phase Red-tailed Hawk. I had tossed out the remains of my bald eagles meal for whatever wild bird would like it and quite a few took me up on the offer.

There was this bird, about a half dozen ravens and at least that number of magpies. And the most exciting, a baby Bald Eagle soared over to check things out. I never saw him land, probably was scared off when I drove down to my gate. The others just flew off a ways and waited til I cleared the area.

These photos aren't the best but I took them through my bedroom window and that's not the cleanest thing going.
Posted by Susan Ahalt at 1:34 PM No comments:

I just want to wish everyone a very Merry Christmas. It's been a busy year at IBR with many highs and a few sad lows but all in all a good one. Thanks to many generous contributions from friends and supporters, the birds are in good shape for the coming year.

And especially to Pacific Power and Rocky Mountain Power for their amazing help in rescuing baby birds from nests or putting them back into them after the fell out. Their foundations awarded this facility two wonderful grants in 2014. They have been supporting the birds for a couple decades, not only with grant money but with poles and manpower.

Everyone also have a wonderful New Year. I hope all your hopes and dreams come true.
Posted by Susan Ahalt at 10:23 AM No comments: 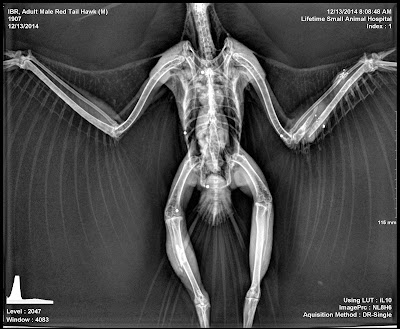 Today I received the following information on the elderly Red-tailed hawk who had been found with severe injuries after being shot. He was banded on February 19, 1995 in Berthoud, CO by the Colorado Bird Observatory, now called the Rocky Mountain Bird Observatory. He was hatched in 1994, probably in that area which is near Denver.

That means when he was shot down with a shotgun he had made it to 20 years old. Altho hawks are routinely of that age in captivity, it is very rare for them to achieve it in the wild due to all the threats to them. First they have to make it through their first winter and 80% of them don't manage that. Then it's a day to day struggle to find a meal and survive predators.

This awesome hawk proves that where there's a will there's a way and I am so saddened by what happened to him. Hopefully someone will come forward and we'll find out who cut his life short. Probably not. My heart will take a while to recover from his loss.

On Friday I drove to Riverton to pick up an injured Red-tailed Hawk. The vets at The Stock Doc outside of town received the bird from just down the road. They x-rayed him and found a fractured radius and ulna in his left wing. There were also pellets in his body.

I took him into my vet the next day for follow up x-rays and found even more damage. The total number of pellets is seven, one shattered the left radius, one fractured the left ulna in two places with some damage to his wrist joint. A third fractured his right tibia. Even with all that the bird had a good attitude.

Unfortunately, because of the extreme damage to the radius it was not repairable. His wing would never be strong enough for him to fly again. It was with a very sad heart I made the decision to euthanize him. The information where he was shot was reported to the USFWS offices in Lander and here in Cody. A few years ago I got another redtail from next door to the vets office who had also been shot. He did not survive his injuries.

One other addition to his body is a federal band. The information on when and where he was banded is kept at the USGS Patuxent Wildlife Research Center in Maryland. I went on their website and filled out the forms but amazingly he was banded some time ago and they've changed the words printed on it. Because of that I still haven't found out how old he is. I guessed him at around ten but will have to wait for the labs response.
Posted by Susan Ahalt at 11:26 AM No comments: 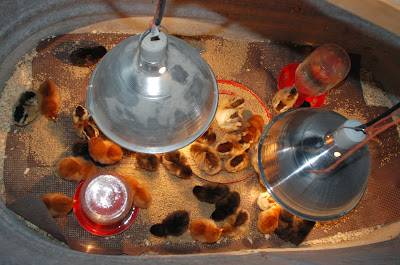 My new chicks arrived early today. Not only before 6:00am but also by at least a day. I ordered 55 of them from a hatchery in Ohio who said they would ship them on the 10th, yesterday. Usually it takes two or three days, luckily the babies can survive on their yolk sac for three days. After dipping each beak in their water pans I put them in their new home, a large metal water trough. With two shielded light bulbs for warmth and lots of food on the floor, they started eating right away.

I got 26 Araucana (they sent one extra), 15 Rhode Island Red and 15 Black Sex-link. All girls as I don't like bullies and most roosters are just that. This is the earliest I've gotten in chicks but I want them to start laying eggs early enough for when the farmer's markets start up and to fill orders from my regular egg buyers.

I kept a little over 40 of my older hens after giving 23 away a couple weeks ago. I'm not getting but a few eggs a day now, not a good percentage considering the number of hens, but they'll start up again in a couple months.
Posted by Susan Ahalt at 7:10 AM No comments: 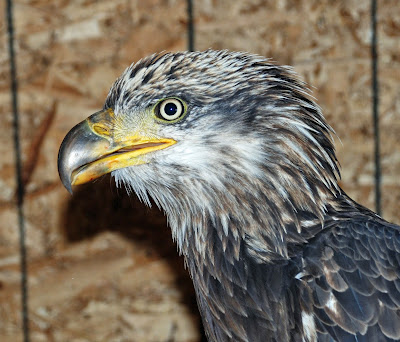 Thanks to Eric this three year old male Bald Eagle is now safe and on the mend. He called me from outside of Bridger, MT after seeing the bird sitting on a downed branch. When he got out of his truck to check him out the bird ran off, didn't fly. Naturally by the time I got up there more than an hour later the eagle was nowhere to be seen.

We split up and in a short time I got a call from Eric that he'd found the bird. Because he was sitting on one of the rails his name is CASEY JONES. Luckily no trains were moving down the track. I managed to catch him quickly thanks to deep snow which made it hard for him to run.

Xrays showed no fractures so I'm hoping it's just bruising on his shoulder. He's been on pain meds for five days and he's now holding his right wing in a normal position. He's been a good bird to work with, eating well, and will be transferred to an outside mew so he can exercise. Because he's in excellent condition I'll take him back to where he was found as there's obviously plenty of food for him to find.
Posted by Susan Ahalt at 9:18 AM No comments:

The other day a friend was trying to catch an elusive mouse in her house so she put out a baited snap trap. As she has both a cat and dog she placed it where neither could accidentally get caught. Imagine her surprise when the next morning she found a very unusual creature in the trap. It's like nothing she'd seen before but apparently has a taste for peanut butter.

This is a completely new species of rodent, rarely seen by humans, very secretive in its habits so little is known about it. 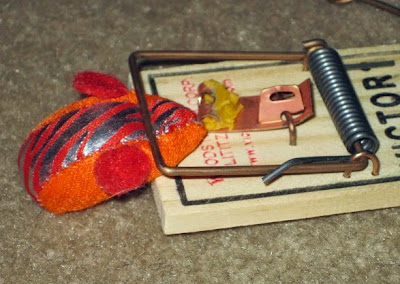 Okay so it's not alive, certainly not after it was caught. Apparently MISS KITTY was pushing her mouse toy around and accidentally shoved it into that very same area where the trap had been set. One shove too many and it was caught. Thank goodness the snap must have scared her so she just left the toy where it was found the next morning. This is not a set up and no animals were hurt in the taking of this photo. Well, except for the rare zebra striped red eared mouse.
Posted by Susan Ahalt at 6:58 AM 1 comment: