I don't have any photos but I've released four birds in the last little while. Two Cooper's Hawks right here at IBR as they are immatures so have no home territory. I also have lots of small birds and mice for them to snack on when hungry.

I got a call from a local church about a bird that they found on their lawn unable to fly. It turned out to be just what I thought, a grebe. This young eared grebe couldn't fly because they have to be in water to do so. I just took it to Beck Lake and released him in the water.

The fourth was a very tiny immature male Wilson's Warbler found after hitting a store window on the strip. I drove that fellow to the best yard any bird could find and released it there. All in all a great couple of weeks.
Posted by Susan Ahalt at 3:56 PM No comments: Links to this post 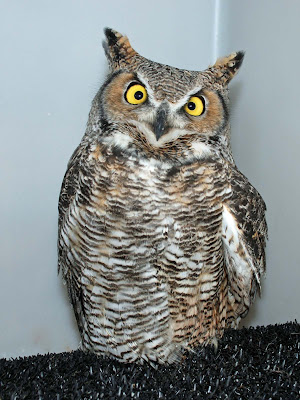 This is PUDDLE, a young GHO who was found after being hit by a vehicle. His left humerus is broken but surgery has been done and the fracture is pinned. He's being a wonderful patient during his confinement so hopefully he'll be able to fly again and be released back to the wild
Posted by Susan Ahalt at 8:44 PM No comments: Links to this post 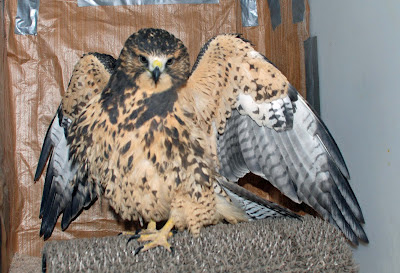 This time it's an immature female Swainson's Hawk. STONY was found by a gentleman out rock hunting near Riverton. He thinks she may have been hit by a car but there is no damage to her that I can see. She's in superb condition, fat and sassy, so apparently she's learned her hunting lessons.

The problem is that very soon all Swainson's Hawks will be staging to start their long migration to South America for the winter. Because of the distance, they start gathering in September and head off in small to large groups for their final destination. If STONY isn't ready for this long trip she will be wintered over here and wait until they return to the area in the Spring.
Posted by Susan Ahalt at 6:38 PM No comments: Links to this post 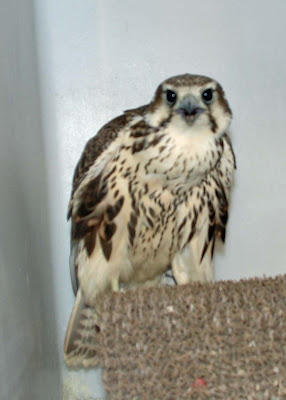 Only this one is quite a bit older than little COTTON. This is an immature female Prairie Falcon found near Powell unable to fly. Xrays show that altho she appears to be in perfect shape, she has two broken wings. I have no idea how she did it but both radius bones are fractured near her elbow. They are the smallest of the two bones in that part of her wing so the ulna will act as a splint until they are totally healed enough for flight.

Most Prairie Falcons are very high strung and not easy to handle but so far this young lady is being very good. She is eating her mice and quail so the future looks very bright for her. Oh yes, her name is INGALL. Remember decades ago the program with the Ingall family in Little House on the Prairie.....get it?
Posted by Susan Ahalt at 6:33 PM 1 comment: Links to this post