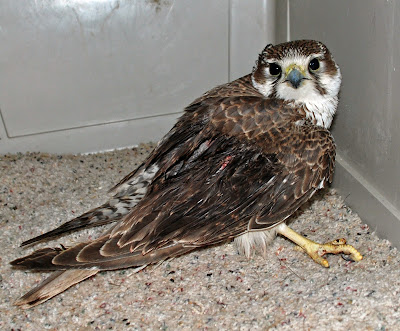 Not the bird, just the name. This beautiful adult male Prairie Falcon was found on his back in a yard on McCullough Dr. east of Cody. Of course his name is DAVID. He doesn't write books either. He doesn't have any fractures but does have a small cut in the underside of his right wing. That area is bruised too.

He also wasn't able to stand when I picked him up but now he's getting closer to doing so. With a temperature of only +1 this morning it's no wonder he was a bit stiff. I have no idea what caused the wound, possibly hit a window when chasing a meal. He's in my warm rodent house for now and will be moved to a larger pen when he's ready.

UPDATE: I'm saddened to say that this beautiful young bird died during the night. He was found early in the morning but I have no idea when his injuries occurred. It was near zero degrees and he was found on his back. That, combined with the damage, probably contributed to his death. So sad.
Posted by Susan Ahalt at 1:12 PM No comments: Links to this post

I received these two beautiful baby Golden Eagles the first week of January. They're in an earlier post. JANUS came in with a broken wing, DEUX just refused to fly when they went to catch him. His problem turned out to be internal parasites.

I put DEUX in the eagle flight barn last week, JANUS went in there this morning. Both are flying now and will be released in a month or so when the weather is stable.

Even after having his wing in a support bandage for a few weeks, JANUS is able to fly the length of the barn, do a 180 and fly back part way. As you can see by the second photo, DEUX is on the highest wall perch, about 20' up. He had absolutely no problem making it up there.

JANUS on the left, DEUX on the right. 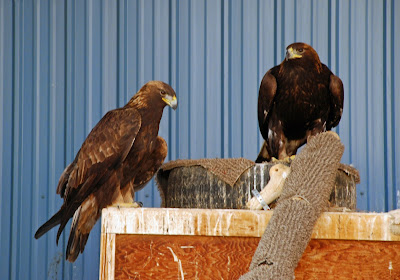 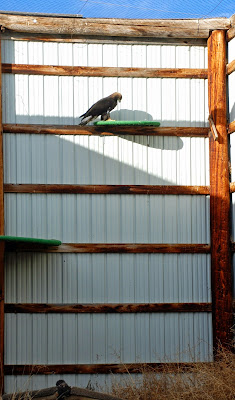 Posted by Susan Ahalt at 9:54 AM No comments: Links to this post